Preparing For A Water Main Break 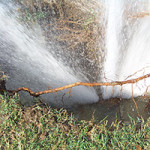 Water, you turn on the faucet, water comes out, every time….until it doesn’t.  We take it for granted that the water will always come out of the faucet when we turn the knob or lift the handle.  Well, this last weekend, that wasn’t the case for my household.

On the weekend I like to sleep in a bit, I am sure many of you do to.  Well, Saturday morning I was woke up around 6am to my door bell ringing. I looked out the peep hole and saw some guy standing there.  Nope, not gonna open the door for him.  Actually, I don’t open the door for anyone unless I am expecting a visitor. Anyway, I went back to bed. About 15 min later, the door bell rings again.  I look out, now there is a couple standing at the door with a dog. Nope, not gonna open the door.  At this point, and now that I am a bit more awake, I start doing some investigating and look out the front windows only to see the road in front of my house is flooded and water seems to be shooting out of a hole in my front yard, where there used to be a plant was a hole filled with water and now the plant is hanging on for dear life in the wake of all this water.

What do I do, I check my faucet, instead of good water flow, I have a dribble at best. Ah, water main break. Now, being prepared, I wasn’t too concerned, as I do have some water put back for just such an emergency. None-the-less, I did call the water company, waited on hold for about 20 min, when they did pick up the lady said that she would place a call to the local person who is on call and someone would be out “soon”.

River in the road

I head out to take a look at the situation and find that it appears the water has been gushing out for some time as there is a huge hole that has been created by the water pressure and a little river has formed on the street.  My next door neighbor came out of her house in a panic saying “I have no water, what did you do?” What did I do? Why would the assumption be that I did something? I say “looks like the water main busted, I called the water company and they will be out soon to fix it”. She continues, “what am I suppose to do, I have no water?” I offer her a couple of bottles of water for drinking and hygiene like brushing teeth, she refused, and was a bit snippy saying “what can I do with that? I need to take a shower and wash my hair” I repeat, she is welcome to a few bottles of water, and that the water company will be out soon to fix the problem.  She again declines the water, and walks back in her house in a huff.

The good news is the water company came out and had the problem fixed by 11am that morning.  Now that isn’t too bad. I certainly wouldn’t call being without water for 5 to 8 hours an emergency, especially when the majority of that time was while we were all sleeping. Sure, it was a bit on the inconvenient side for a bit, but not a disaster, yet, my neighbor was totally put out over the inconvenience as if the world was coming to an end.

Yesterday, I saw them both again and explained what the water company did and also gently mentioned the suggestion of having some water put back in case next time we are without water for a longer period of time. Both dismissed that suggestion stating that “what are the changes that will happen again?” They stated that storing water doesn’t make any kind of sense and wouldn’t be enough to do any good anyway for bathing and showers. I explained, that in case of a disaster we may just be doing little sponge clean ups rather than a full bath or shower and that a bit of stored water would be good for drinking mostly but small cleanups as well, that any little bit would help. Nope, they didn’t see the point and were too busy to talk any further about it.

This is just another example how some people think when it comes to being prepared. Total denial in that nothing major will cause an outage of utilities and therefore no need to prepare.

It is also an example of why I posted Unlimited Urban Clean Drinking Water Supply , you just never know when the water you expect to be there won’t be. Sure, Saturday the faucet didn’t turn on, but, if I didn’t have water I could of at least pulled some water from out of the hole in the front yard and filter it for drinking if need be. Something else I mentioned to my neighbor, that if they didn’t want to store water, they could at least invest in a good water filter like a Berkey.  Nope, they weren’t even going to do that. I of course made these suggestions with some good op sec in mind, like I was brain storming with them as to what “we” could do to be better prepared for next time, don’t want them to think that I am the go to person for water.

It was a fantastic reminder that being prepared is like an insurance policy. When I saw the water wasn’t flowing out of the faucet I didn’t think much about it, I had water, I had a Berkey filter, I had bottled water, I even had water in my rain catch barrels. No big deal that I didn’t have water from the faucet.

It was also a great reminder that for some no water for just a few hours is enough to put some people into a panic, it is important to offer help, but also keep some great operational security in place as well.

We use cookies to personalise content and ads, to provide social media features and to analyse our traffic. We may share information about your use of our site with our social media, advertising and analytics partners who may combine it with other information that you’ve provided to them or that they’ve collected from your use of their services. You consent to our cookies if you continue to use our website.OkPrivacy policy